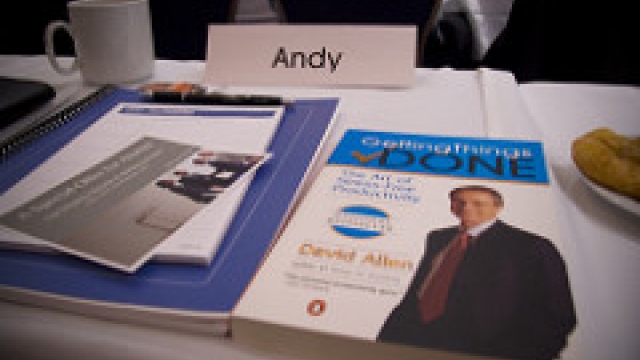 My wife, Robin, and I recently attended [David Allen](http://www.davidco.com)’s [NYC RoadMap Seminar](http://www.davidco.com/seminars/seminar_the_roadmap.php) and were thoroughly impressed. Before our trip we really weren’t sure what we were going to get out of it. David’s previous seminar’s were two day’s, this was one. The shortest seminar Robin and I have been to entailed four days and that was to learn [hypnosis](http://www.trucor.com/home). (_Look into my eyes…Deep into my.._)

We arrived at 8:15am quickly signing in, grabbing our name-tags, meeting David’s wife Katherine, then began surveying the area. We were pretty early but not the first. Nine came around pretty quickly as we got to know those around us and taking note of the rest of the class that was to enter. Talking with one of David’s assistants, we learned that usually the class size hovers around 150-160, but today they were expecting over 180. By the looks of things they came close.

The class was packed with predominantly professionals, either as individuals or with small teams. The rest of the class looked like people who had an interest in GTD but might be there of their own accord to better themselves or those they work with. We talked to a number of people who were within the education system, charitable organizations, even a lady who is working on a documentary of David Allen. We also noted a few teens that had come with family members. It’s really exciting to see the torch getting lit while young. If you can catch the fever then you’ll have it forever.

David got things rolling right out of the gate. He set the day up with the frame that anything you got out of the class was going to be useful. That you could enter the system from the top, bottom, middle, or side and still come out better for it. The [RoadMap](http://www.davidco.com/seminars/seminar_the_roadmap.php) series was a tool designed to show “Where we are”, “Where we’re going”, and “How we’re getting there”.

It was also quickly apparent how vibrant David was. I had seen him through online videos but the real thing was fantastic. While all the material you ever see of him is a well kept, business like, straight shooter (which he is), he is also a fully involved character. His levity and mannerisms reminded us of [Martin Short](http://en.wikipedia.org/wiki/Martin_Short) from time to time. It was great the emotion he would transmit from deep thought to deep laughter and I couldn’t help but be caught up in how much fun it was to learn.

Those who attended were given breakfast, lunch, the GTD Art of Stress-Free Productivity book, a [Levenger](http://www.levenger.com)-like pad, pen, and a great workbook he called the “Trip Guide”.

David explained how the seminar he used to give wasn’t very good for people who had read the book. Great if you were off the street without a clue, but most people who came to the two-day seminar were self-selecting enough to have read the material. The birth of the RoadMap series would indoctrinate those who were new; they would go home and map the book to their wild day of knowledge. While the rest of us who have been crashing against the shoals would further our knowledge of navigating the dark waters of life. All in a 9-5 time-frame. Yea, sounds like a good challenge doesn’t it?

David does it with style and grace though. Throughout the seminar I was marveled by how tuned he was. I could almost plot it on a graph, the high energy beginning tucking into deep delta like work flow, cresting back up as we needed rest, then diving down again to reach within ourselves for truths. Then when we almost couldn’t take anymore he breaks our state and again has us laughing in revelry making for a well rounded and highly productive day. Talking to a few people I had been tracking during the day, the early users to GTD were a bit overwhelmed but very positive and glad to have the take-aways so they could iterate. On the opposite side those who were pretty skilled in the ideas to begin with got deeper knowledge of the philosophy and how to get past the caveats we all end up falling in from time to time.

David was very approachable; during every break he took the time to talk to those who had questions, signing autographs, or acting as a tuning fork. I really can’t imagine being him. As receivers, we were all exhausted from the amount of content to absorb and how much mental energy it took to integrate. David is the broadcaster though. Throwing out concepts from high to low at 200%. Attempting to give the audience as much of a picture as he can of a simple yet detailed system — as he calls it, “Advanced Common Sense”.

Which it really is. “It’s not complex, it’s discrete,” he would say and I agree. The trick is, simplicity is built thinking through complex patterns and I’m glad men like David have tilled this ground for me. Every time I get deeper into knowing I find more and more subtle nuances. As I took pages of notes I was very aware of [Liquid Minded](http://liquidminded.com) in my head and smiled inwardly — we are crossing hurdles not attempted before.

After the seminar let out, a handful of [GTD|Connect](http://davidco.com/connect/) members went to have drinks and further network. [Forrest](https://www.dcnelson.com/DCNELSON/WEB/me.get?web.websections.show&SCH5863_203), [James](http://www.tabtronics.com/ABOUTUS/Staff/PresidentCEO/tabid/85/Default.aspx), Jordan, Robin and myself were joined by [Kelly](http://www.davidco.com/blogs/kelly/ “Kelly Forrister”), David, Katherine, and a few others who have worked or are working for DavidCo. It was a great time to sit and reflect on the day and look forward. We all got to share a bit of who we were, how we fell in to GTD and where we were going. I must say it’s a great thing to sit at a table of people who are all practitioners of executing. I had a glimpse of what it would be like if everyone was singing this tune and it was awesome.

At the end of the day I thought my brain had liquefied. I was seeing bubbles and stars and, back in my room, had a great night of sleep. Now that I’m home and the seminar is being broken down by my subconscious into little lessons, I can’t help but smile. I’ve learned so many new things and the subtleties of many others. When you work