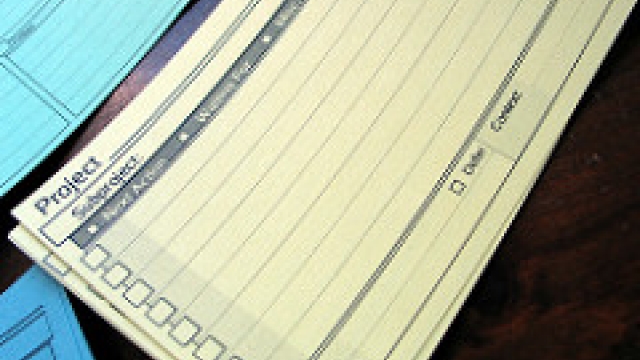 Focus & Planning, The Answer to Procrastination I work very hard to stay in the [zone](http://www.thatvoodooyoudo.com/best-practice/flow/). It’s worth mastering; the zone is where we all do our best work and derive great satisfaction. Focused, flowing, executing your world…cranking those widgets. Whether at work, home, or at play you can’t stay in the zone long if your world is in disarray.

When working I just want to churn through what I have before me. I don’t want to think about what needs to be done. Why? Thinking about your lists is a radically different thought process than the work itself. At work I have my [music](http://www.last.fm/user/ciordia9/) in the background with my workload before me broken down into pieces I understand and can handle. If the project is to accomplish a set task that has been thought out beforehand you just run down the list, checking things off usually in short order. If not, if the project has not been thought through, then I make a project to do the research and think it through, bringing new puzzle pieces to the table with each bit of data uncovered. Either way, I’m cranking widgets.

Of course life is chaotic so new problems will emerge during this process–lovely [rat-holes](http://en.wikipedia.org/wiki/Ratholing). You have to be careful not to get sucked down into one of these or when the ride ends you’ll find yourself hip deep in questions and uncertainties. When I feel that I’ve become the main character in [DigDug](http://en.wikipedia.org/wiki/Dig_Dug) I try and step back and look around. If I am, indeed, entering a new set of problems, I back away and document the situation, attacking it as a new problem not an extension of the other. The key is, don’t let dependencies creep up on you. They stack fast and weigh a ton. The worst thing for me is when the end of the day arrives and I am anything but done, clearly frustrated at losing the momentum I had at the beginning of the day. It feels wasted. [David Allen](http://www.davidco.com) says, “Paying attention to what has your attention is productive”, because “If you don’t give things that have your attention the appropriate attention; they will demand more of your attention than they deserve.”

My home is in a state of continuous iterative design. That’s the nice way of calling it a time and money pit. I have lists and lists of where both should be spent. A part of the GTD methodology is negotiating with yourself and those around you. “It’s ok to decide not to decide, just have a place for it”, David says. When I list my home projects, it’s important that I figure out the next concrete step I can take to move it forward. Clean the carport, organize the attic, extend the garden, spring cleaning–if I kept them as such, high-level outcomes rather than baby steps, I’ll never attack them no matter how much time I have because they are daunting. If, however, you give yourself the time to look at what it would take and expel it from your head to some digital or paper record, you can forget about it and do it at your convenience. We fail ourselves not because a task is hard but because we haven’t properly assessed the task at hand, so we end up shutting down or giving up far too early. Once you know the next step for each project, the nagging quiets itself because you’ve captured the requirements. This is why the idea of “next action” is so important to GTD, and why it’s so important to be honest with yourself when identifying them. If you work hard, you might be like me and play hard, too. Last October I took up [skydiving](http://www.flickr.com/photos/ciordia/sets/72157594297559866/). Since then I have been soaring through life lessons centering around what you can control, what you can’t control, and ways of regaining control when the unexpected happens. Much of it plays right into the GTD philosophy. “Look before you leap,” the saying goes. Be pro-active and learn all you can while still on the ground, before you’re in the thick of the action. Think about the people you’ll be working with. Check the conditions and think through the myriad of decisions before you ever step out the door. Have a plan. Once in free fall it’s all about you and your awareness, executing that plan–cranking widgets! Now is not the time to plan but to execute, you only have 60 seconds. Pull time comes quick.

A skydiver is trained for malfunctions and the unexpected does happen. You never want to lose your head here. A mind like water means you accept and give back with equal force. When you have to decide what you are going to do with only seconds to spare you need to not lose your cool. You need to harness the zone’s potential and execute to the best of your abilities. There’s no time for thinking through what the next action is. That action should already be on the table and you’re going to perform it because the criteria is valid for the situation. This translates into a multitude of scenarios. If you’re a chef in the kitchen, you have [mise en place](http://en.wikipedia.org/wiki/Mise_en_place); if you’re a programmer or an engineer, you develop [specifications](http://en.wikipedia.org/wiki/Specification); if you’re a coach, you have a [playbook](http://en.wikipedia.org/wiki/Playbook); if you’re a commander, you have a battle plan. To work to your fullest means you have an idea of what you’re going up against and handling the new situations with the proper resources. Getting Things Done isn’t about staying in control, it’s about regaining control when we (inevitably) lose it. I’m a trained hypnotist, and during my studies I’ve been taught that a state of hyperempiria (focused trance) for extended durations will kill you. We aren’t meant to stay in a hyper state of focus forever. When you come out of a long duration zone or flow, how tired are you? I’m generally exhausted. That’s why it’s important that I am satisfied with the output of work done during these periods. Sitting back with a smile on my face and a beer in hand celebrating the day is so much better than scowling at where you ended up and how much went wrong, especially when you spent a lot of energy getting there.

There’s a quote I made years ago before attending a fantastic retreat, “Expect the unexpected, except expect nothing.” Things from the wondrous, to the mundane, to the upsetting happen to us every day in unexpected ways. We can never see what’s coming, but finding a way to easily and correctly maneuver through each situation is key. Have a (flexible) plan, and focus will follow naturally.